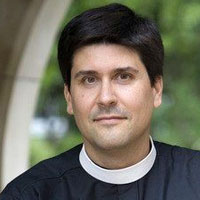 The Rev. Jamie McElroy comes to St. Luke’s Episcopal Church and School from Jackson, Mississippi, where he served five and a half years as Rector of St. James’ Episcopal Church and School. During his time at St. James’, he helped exponentially grow parishioner involvement in church ministries by rebuilding the church’s committee system, and by guiding the congregation to articulate its mission and vision for its work as the Body of Christ. Thereby the congregation creatively developed its pre-existing ministries—including St. James’ pre-k school—while also conceiving and growing many new ministries.

Before coming to St. James’, Jamie served three years as Canon for Outreach & Evangelism at St. Peter’s Episcopal Cathedral in St. Petersburg, Florida, seat of the Diocese of Southwest Florida (and his wife, Peyton’s, hometown).

Prior to moving to the Southeast, he worked in the San Francisco Bay area, serving four years as Director of Children, Youth & Young Adult Ministries at St. Bede’s Episcopal Church in Menlo Park, California, while also serving as a chaplain and service learning coordinator at Trinity, Menlo Park—St. Bede’s pre-k through 5th grade school—as well as the director of Los Ayudantes, an English literacy tutoring program for Latino school children in Redwood City, California.

Jamie earned his Masters of Divinity at the Church Divinity School of the Pacific (the Episcopal seminary that is part of the Graduate Theological Union in Berkeley, California), and he was ordained at Grace Cathedral in San Francisco in 2009.

As a young adult, before following the call to ordained ministry, Jamie worked as a newspaper reporter in North Carolina, wrote a non-fiction book (published by Simon & Schuster) entitled We’ve Got Spirit, about the best high school competitive cheerleading team in the country (from Kentucky), taught high school journalism in Massachusetts, helped his wife, Peyton, found and run a small theater company in Boston and New York City, and did public relations work for the Yale University School of Music.

Jamie and Peyton met as undergraduates at Yale, where Jamie got his B.A. in English Literature. Peyton eventually went on to earn her Masters in Philosophy of Religion from Yale, then a PhD in Philosophy from Stanford. For the past eight years, Peyton has taught applied ethics, moral philosophy, critical thinking and religious studies at colleges in the Tampa and Jackson areas and has plans to continue doing so here in Mobile.
Jamie was born and raised in Washington, DC and attended the DC Public Schools from kindergarten through high school. He credits his parents with planting the seeds of faith through their devotion to public service—exemplified by their devotion to the DC school system as teachers, activists, fundraisers, and volunteers.

Jamie found his way to the Episcopal Church at the age of 27 when he was baptized at the Cathedral of St. John the Divine in New York City. Peyton, a cradle-Episcopalian, served as sponsor at his baptism and is, in a sense, his sponsor in all things, challenging and inspiring him every day. Their two kids, son, John and Alex, are constant sources of joy, who are growing up way too fast. 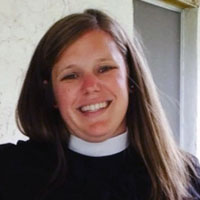 Mary Alice comes to Mobile after serving for three years in a shared ministry as priest-in-charge at the Episcopal Churches in Panama City Beach, Grace and St. Thomas. Prior to her time in Panama City Beach, she served as the curate at St. Paul’s Daphne, primarily overseeing their youth ministry. In 2007, Mary Alice graduated from the University of the South in Sewanee, Tennessee with a BA in History and Political Science, and in 2014 from Virginia Theological Seminary with an Masters of Divinity. Active participation in diocesan ministries has been important to her, and she serves as the Spiritual Director for Happening and currently serves on the Standing Committee.

Mary Alice’s primary responsibilities at St. Luke’s include serving as a chaplain to the school, assisting in outreach ministries, and preaching and celebrating at St. Luke’s Church on Sundays once a month. Having grown up at Christ Church Pensacola and their Episcopal Day School, Mary Alice is excited to be working in a church and school community again.

When not serving at St. Luke’s you will also be able to find Mary Alice serving as Missioner for Mobile. The diocesan project that brought Mary Alice to Mobile is new, creative, and often falls under the umbrella of developmental or missional. She has a passion for serving God’s people and the Church that has led her to trying something non-traditional. A significant part of her ministry focus through the diocese will include discerning and pursuing the establishment of a community outreach center with a pay-as-you’re-able cafe.

Along with a love for God’s Church, Mary Alice enjoys travel, getting outdoors with her dogs Frannie and Roscoe, and chasing a good sunset. 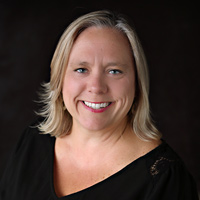 Wendy has been St. Luke’s Parish Administrator for the past 15 years. She serves as a personal assistant to the Rector, Reverend Jamie McElroy, and handles the day-to-day operations of the business side of the church, including payroll, taxes, accounts payable and receivable, donations, audits, bulletins, etc.

A Mobile native, Wendy attended the University of South Alabama, where she graduated with a Bachelor’s degree in Hotel and Resort Management with a minor in Psychology.

Joe Setzer is a native of Charlotte, NC. He is currently the Choral Music Director and Organist at St. Luke’s Episcopal Church and School in Mobile, AL

Joe’s past experience working as the Associate Director of Choristers at All Saints’ Episcopal Church and Day School in Phoenix, AZ, and as the Fellow in Church Music at Trinity Episcopal Cathedral in Columbia, SC, has provided him with valuable choir training and church music experience that will help in achieving this wonderful vision for St. Luke’s in Mobile.

Mr. Setzer is a graduate of the University of South Carolina, where he earned both a Bachelor of Music and a Master of Music in Organ Performance. Along with playing the Organ, Mr. Setzer also studies voice and he sings regularly. His former teachers include Dr. Jared Johnson, Dr. Kenneth Miller, and Dr. Katie Ann McCarty in organ, and Dr. Peter Barton and Mr. Jacob Will in voice. He also has extensive experience with the Royal School of Church Music summer courses, serving as an organ scholar, a proctor, and head proctor at various RSCM Charlotte courses and as a singer for the RSCM Carolina course. 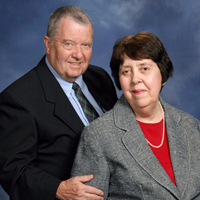 Val and Bonnie Jean Early have been involved together as church musicians since 1967. They are the retired founders of Mobile’s Singing Children and the parents to two musical children.

Val and Bonnie Jean were St. Luke’s Ministers of Music for eleven years. They are now semi-retired and assist the church with the Handbell Choir and the Women’s Ensemble.

Our triennially elected board members.

Many of our wonderful parishioners offer their services to St. Luke’s as volunteers. If you are interested or would like more information on how to become actively involved in our church, please contact us.

Office Ministries
This group of ladies volunteer in the office to assist the Parish Administrator and are led by Gina Droke.